Employing over 6,000 people nationwide, and generating an estimated €550 million annually, the creative industries are central to Ireland’s economic and cultural achievements on the global stage.

As a UNESCO City of Film, and the home of the Irish Film Board, Galway is situated at the heart of Ireland’s creative and cultural sector. Galway is also the forthcoming European Capital of Culture 2020 and Huston School of Film & Digital Media  will be making key contributions to Galway’s celebration of events in that year. 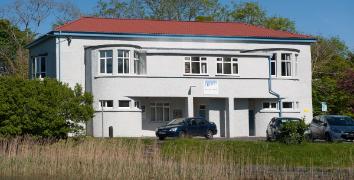 Research and taught programmes at the Huston School of Film & Digital Media  are built upon the strong links between the school and the wider creative community, offering students the unique opportunity to collaborate with top industry professionals in a world-renowned University environment.

Many Huston graduates are pursuing successful careers in the fields of film and media both in Ireland and abroad, including graduate Will Collins, who was the screenwriter of the animated film Song of the Sea, nominated for an Academy Award for Best Animated Feature in 2015.

Graduates of the Film Production & Direction and the  Film Studies: Theory and Practice programmes at the Huston School of Film & Digital Media have screened their films at a range of international festivals including Cannes and Tribeca. Graduates of our Film Studies:Theory and Practice programme occupy a diverse range of roles in the media industry, including film festival programmers, script readers, and lecturers, as well as working as writers, producers and directors. Digital Media graduates are working in a range of positions from game design through to establishing their own companies developing project ideas. Alumni of the  MA Public Advocacy and Activism programme are also working across a diverse range of companies including leading national and international arts organisations, charities and NGO's.

Some features need cookies to work properly. Cookies also let us (a) remember your preferences, (b) collect anonymous usage statistics, and (c) manage any online ads for nuigalway.ie.